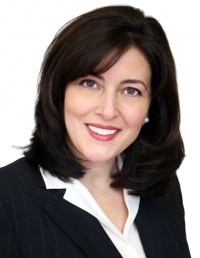 Sonia Di Valerio is a Partner of the firm in Rawle & Henderson LLP’s Philadelphia and New Jersey offices. She concentrates her practice on the defense of trucking and bus companies and their insurers. She regularly addresses claims of negligent entrustment and spoilation in cases involving catastrophic injuries. As part of that practice, Ms. Di Valerio represents clients in connection with employment litigation matters in both the State and Federal Courts of Pennsylvania and New Jersey. In addition to representing trucking and bus companies, Ms. Di Valerio has also represented municipalities and municipal authorities as well as privately owned companies. She has defended these clients against age discrimination claims, wage claims, whistle blower claims and claims arising under the FMLA and FLSA.

In addition to litigated matters, Ms. Di Valerio has counseled clients in connection with termination issues, hiring issues and non-compete clauses.  She has extensive experience in binding and non-binding arbitrations as well as court conducted and private mediations.  She has tried cases to verdict in the State Courts of New Jersey and Pennsylvania as well as the Federal Courts.

Ms. Di Valerio earned her J.D. from Temple University School of Law in 1999 with distinguished class performance in Criminal Law and Evidence. While attending law school, she served as Editor-in-Chief of the Temple Environmental Law and Technology Journal. She served as a judicial law clerk to the Honorable Lee B. Laskin, J.S.C., in the Superior Court of New Jersey from August 1999 to August 2000.  She earned her B.A. in Communications from Temple University in 1992.

Ms. Di Valerio is a member of the Delaware County Bar Association.