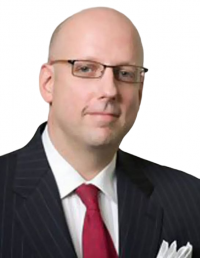 Scott F. Griffith is a Partner of Rawle & Henderson LLP in the Philadelphia office.  He concentrates his practice in the areas of Environmental, Toxic and Mass Torts, Products Liability, Professional Liability, and White Collar Criminal Defense.

A veteran trial attorney, Scott has tried over 60 civil and criminal matters to verdict. He is one of five Rawle & Henderson LLP attorneys on the national asbestos trial team of a Global 200 friction brake manufacturer, successfully defending that corporation at trial in the United States. He is a member of the national trial team of a global tile manufacturer, representing that company in products liability matters. Scott has represented a Fortune 500 supplier of electrical products in asbestos litigation, a Global 150 employer in benzene litigation, and a publicly traded products services company that outsources maintenance, repair, operation and production (MROP) products in both silica and asbestos litigation. He likewise represents corporate concerns in environmental litigations ranging from underground chemical emissions to landfill cleanup.

Scott also successfully defends educational institutions against claims of sexual abuse, most recently in Philadelphia. Scott is counsel to a worldwide financial institution in corporate employment departure matters. He is also a consultant to a New York based investment research group and is frequently called upon to counsel that firm’s clients on litigation matters.

Scott’s criminal trial experience includes the representation of professional athletes, entertainers, and politicians. He has successfully defended corporations and individuals charged by the government in a wide range of matters, from corporate fraud and tax evasion to capital crimes and corrupt organizations. Scott routinely counsels corporate management on white collar criminal matters including bank, investment and securities fraud, money laundering and forfeiture.

Scott has received a BV rating from Martindale Hubbell as selected by his peers. He is the former Pennsylvania State Chair on the Council on Litigation Management.

Plaintiff asserted a wrongful death claim on behalf of her husband alleging pleural mesothelioma after years of personal brake changes on family vehicles.

Result: Honeywell was only defendant at trial. A mistrial was declared in the Phase I damages portion after plaintiff’s counsel’s improper argument. Case settled for less than 10% of plaintiff’s demand prior to trial.

Result: Honeywell was only defendant at trial. Jury awarded $730,000 in Phase I. During Phase II, successfully argued for the admission of bankruptcy trust documents signed by decedent but not disclosed prior to trial. Juror found Honeywell not liable for decedent’s injuries.

Defendant, a well known and current NBA player, was charged with multiple felony, misdemeanor and traffic offenses following the death of his best friend in a motor vehicle accident in which the car was driven by the defendant.

Result: All criminal charges, including all felonies and misdemeanors, were dismissed. Defendant pled guilty to traffic offenses and was sentenced to a suspended sentence.