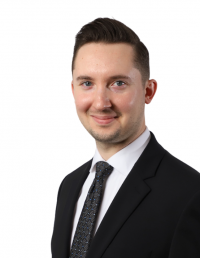 Rawle Partner Linda DeCorato is extremely excited that Mr. Shemeth has joined Rawle and anticipates that he will provide critical support to both his colleagues and clients as he continues his promising legal career at Rawle & Henderson, LLP. Upon his joining the firm, Ms. DeCorato observed that “Luke’s prior and continuous presence in the courtroom during bench trials will serve him well in supporting our trial attorneys and aid Luke’s own development as he moves toward his own trials in medical litigation.”

Prior to joining Rawle, Mr. Shemeth worked as an Agency Attorney for New York City Legal Services, where he appeared in court on an almost daily basis. Mr. Shemeth’s advocacy included comprehensive motion practice, pre-trial conferences and hearings, witness and trial preparation, and bringing to verdict numerous trials with many positive outcomes that stemmed from his heightened level of commitment.

During law school, Mr. Shemeth interned with the Connecticut Office of the Attorney General and contributed to the civil prosecution of multiple Fortune 500 companies by drafting briefs and memorandums of law and assisting in trial preparation. Mr. Shemeth also interned with the United Nations and International Justice Mission in Manila, Philippines, which provided him with the opportunity to hone his skills as a legal researcher.

In addition to his legal internship in the Philippines, Mr. Shemeth was a volunteer for organizations contributing to the international community as well as an organization providing educational services in Cambodia, and a non-profit organization performing in agricultural and sustainable business projects in El Salvador and Honduras.