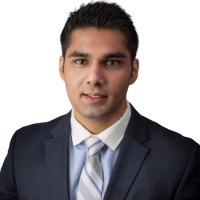 Inder Deep Paul is Of Counsel in the Harrisburg office of Rawle & Henderson LLP. He concentrates his law practice in the area of commercial motor vehicle defense.

Inder earned his J.D. from the Widener University Commonwealth Law School, Harrisburg, Pennsylvania, in 2016. While in law school, he served as vice president of the Moot Court Honor Society and was a member of the Trial Advocacy Honor Society. He was also a representative of the Student Bar Association and co-authored the article “Interview with the Judge: A Lawyer and Law Student Talk with Superior Court Judge Victor P. Stabile about Legal Writing and Advocacy,” published in the March/April 2016 issue of The Pennsylvania Lawyer.

Inder won the national award “The Order of Barristers” in 2016 at Widener Law for excellence in oral and written advocacy. He served as a student clerk in 2016 for the Honorable John F. Cherry, Dauphin County Court of Common Pleas in Harrisburg. In 2015, he served as a student clerk for the Honorable J. Michael Eakin of the Pennsylvania Supreme Court in Mechanicsburg and as a law clerk for a Harrisburg law firm. He is fluent in English, Hindi and Urdu.

Inder earned his B.A., with honors, from the University Institute of Legal Studies, Panjab University in Chandigarh, India, in 2012. He majored in International Law. In addition, he won “Best North Zone Oralist” in 2009.