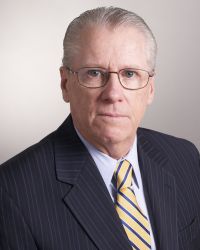 U.S. District Court for the Eastern District of Pennsylvania
U.S. Court of Appeals for the Third Circuit
U.S. Supreme Court

Charles A. Fitzpatrick, III focuses his practice in defending medical malpractice, nursing home liability, pharmaceutical and catastrophic injury cases. He is a member of the bar of Pennsylvania and is admitted to practice in the United States District Court for the Eastern District of Pennsylvania, the Third Circuit Court of Appeals and the United States Supreme Court.

Charles is a native Philadelphian and a graduate of St. Joseph’s Prep, 1965; St. Joseph’s University, 1969; and the Law School of the University of Pennsylvania, 1976. He served in the United States Navy from 1969 to 1972, achieving the rank of Lieutenant. He served with the Riverine Forces in Vietnam in 1970-1971, and was awarded the Navy Commendation Medal with Combat V and the Combat Action Ribbon.

He served as law clerk to The Honorable Edmund S. Pawelec in the Court of Common Pleas of Philadelphia County. Since 1980, he has defended catastrophic injury, medical malpractice and pharmaceutical cases. He has tried over 135 cases to verdict.

He has lectured extensively to attorneys and physicians concerning the law of medical malpractice.

Mr. Fitzpatrick has been rated AV Preeminent by Martindale-Hubbell for 2020 for the 37th consecutive year. His AV Preeminent rating is the highest peer review award possible for legal ability and professional conduct and is based on the confidential evaluations of members of the Bar and the Judiciary. Charles was listed in the 2013 edition of Top Attorneys in Pennsylvania and the 2012 edition of Philadelphia’s Top Rated Lawyers. He was named a Pennsylvania Super Lawyer by Super Lawyers 16 times in succession from 2004 through 2019.